Muffin Time party game is a random card game from Big Potato Games where anything can (and probably will) happen.

The aim? Collect 10 cards. Sounds simple, right? But every card has unique and wacky effects! Get ready to steal cards, trick your opponents, and bend the rules in your favour as you battle your friends and family in this chaotic card game.

RAINBOW AND PIE FLAVOUR
This updated edition comes complete with over 80 extra cards from the two Kickstarter expansions — including a homicidal potato and an exploding turtle.

SKATEBOARDING COWS, EXPLODING TURTLES, TALKING MUFFINS
The list goes on. Use over 200 unique cards to crush your friends and win the game. This version includes expansion packs!

TEN CARDS OR BUST
The first player to collect 10 cards and shout “It’s Muffin Time!” is crowned the winner

300 MILLION PEOPLE CAN’T BE WRONG
Based on the ultra-popular ‘asdfmovie’ series on YouTube. Go check it out — it’s really weird. 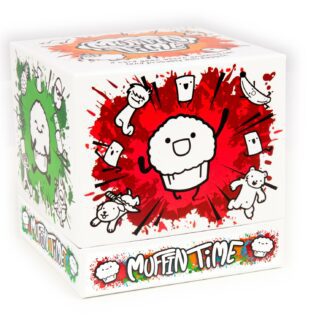